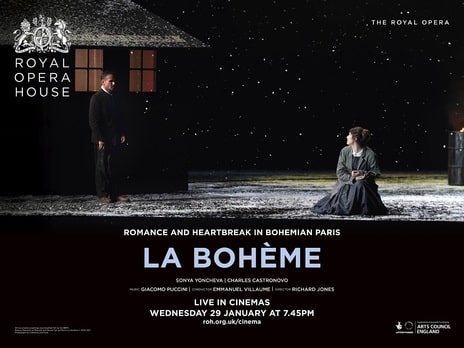 When Rodolfo, a penniless poet, meets Mimì, a seamstress, they fall instantly in love. But their happiness is threatened when Rodolfo learns that Mimì is gravely ill.

Richard Jones perfectly captures the blend of tragedy and comedy in La bohème, and provides an acute analysis of Puccini’s young would-be artists and their lovers, the soulful Mimì and spirited Musetta. Spectacular designs by Stewart Laing evoke both the poverty of the bohemians’ attic home and the splendour of Paris’s shopping arcades on Christmas Eve.

Puccini’s score is one of his most beautiful, with highlights including Rodolfo and Mimì’s introductory arias and love duet in Act I, ebullient music for the chorus and soloists in Act II, and Mimì’s poignant death scene, over which the composer himself wept. La bohème received its world premiere at the Teatro Regio, Turin, on 1 February 1896, and its Covent Garden premiere the following year. It is currently one of the best-loved operas worldwide, and the opera most performed at the Royal Opera House.